The Crinan Canal – “the most beautiful shortcut in the world” 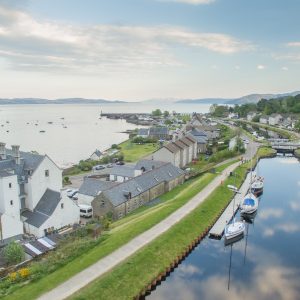 The Crinan Canal is a stunning and historic monument to the early Industrial Revolution. With a chequered history of financial catastrophes, project delays, construction disasters, it was like an early soap-opera. These days, thousands of tourists from around the world come to see its beauty and to learn of its history. From walkers, canal enthusiasts to tourists, it is a popular spot to visit. The Crinan Canal is only five miles from The Grey Gull at Ardrishaig, so we are conveniently located when you want to visit the area.

History of The Crinan Canal
The west coast of Argyll and the Western Isles of Scotland, were difficult to reach by sea because of the often dangerous navigation required. It was a 100mile (160 km) dangerous sailing trip from Crinan, round the Mull of Kintyre headland and up Loch Fyne, to Ardrishaig and Lochgilphead.

With the emergence of canals around the rest of the UK, there were various attempts to build an alternative route including a survey of the region by James Watt in 1771. However, funding was not available so the idea lay dormant until 1793.

In that year, Parliament passed the Crinan Canal Act, to build a canal, initially known as the Duke of Argyll’s Canal. By that time investors could see the potential financial gains to be made and so it was easy to raise the necessary money to build the canal. A total of £92,000 was raised from investors in London as well as local businessmen in Glasgow. Investors included local wealthy land-owners and even the potter, Josiah Wedgwood.

Management problems for the Crinan Canal
A consulting engineer, John Rennie, who had not only surveyed the area but also had plenty of experience in building canals, was appointed. There was also a resident engineer working on site however, the first signs of the management problems ahead can be seen with the location of the head office for the project. The Crinan Canal Office, was in Inveraray which was a day’s journey for the engineer which was of course, a highly inefficient use of his time.

Finding suitable labour was another early problem as they needed up to 600 workers but the local labour was not skilled in canal building. The management of the labour was poor which led to low quality work such as irregular digging or failing to leave a flat base to the canal.

A totally inexperienced engineer who had not even seen a canal, was appointed. Some sub-contractors did not perform and key personnel were often absent for lengthy periods.

Other problems included walls of the canal collapsing, surveys were flawed with construction on sand in some places, and leakages were found in the canal walls.

Funding problems
Not surprisingly, founds soon ran out. The Government agreed to lend further money backed against toll payments when the canal was operating. The investors also had to raise further funding to complete the canal.

Operation of the Crinan Canal
It was finally opened in 1801 but even then it was still not complete. Thomas Telford recommended improvements and refurbishments that were needed to make it a viable proposition. One of his experienced engineers and a gang of skilled canal builders overhauled the canal to fix leaks and straighten some of the significant curves in its route.

It was opened again in 1817 and was operated commercially up until 1991.

These days the canal is used for recreational boating and is a key tourist destination for western Scotland.